Most landscape or townscape assessments will include Zone of Theoretical Visibility (ZTV) maps, which show the area from which an object could theoretically be seen. ZTVs are based on digital terrain models (DTMs).

There are two principal types of ZTV: 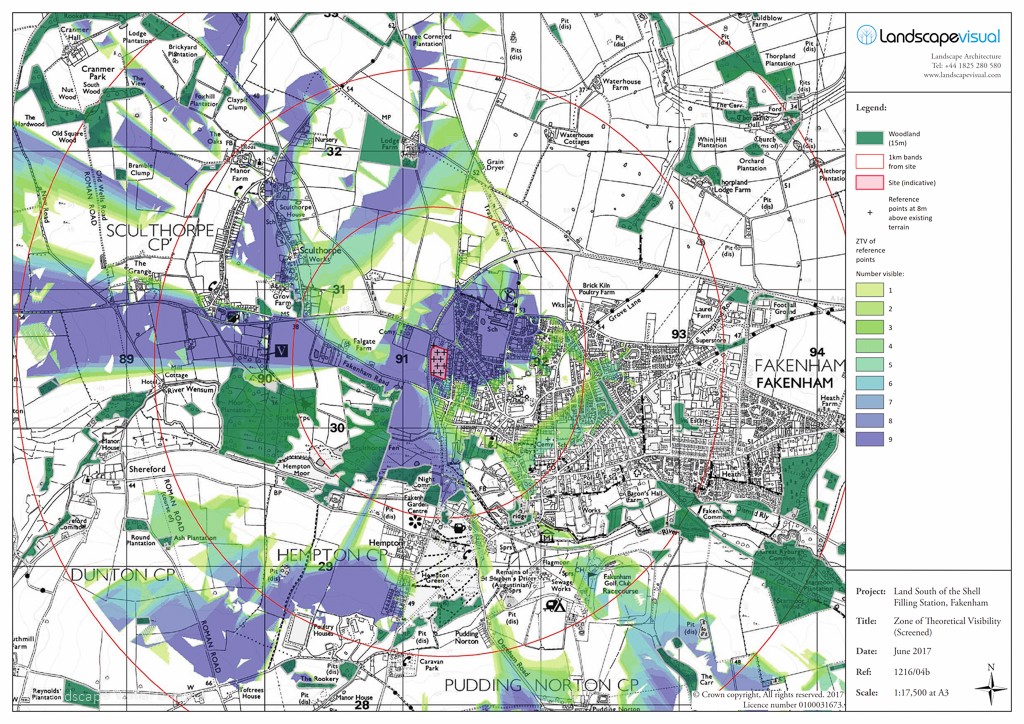 ZTVs are normally produced using scripts in Geographical Information System (GIS) software. The scripts can take into account earth curvature and atmospheric refraction (bending) of light, which influence visibility especially in more distant views. For example, viewpoints for wind farms may often be well 10 to 25km from the development.

The plan below is a bareground ZTV for a single wind turbine. The ZTV is based on OS Terrain 50 and has been calculated to different heights to gain an understanding of where different parts of the turbine would be visible (e.g., the hub or the blade tips). 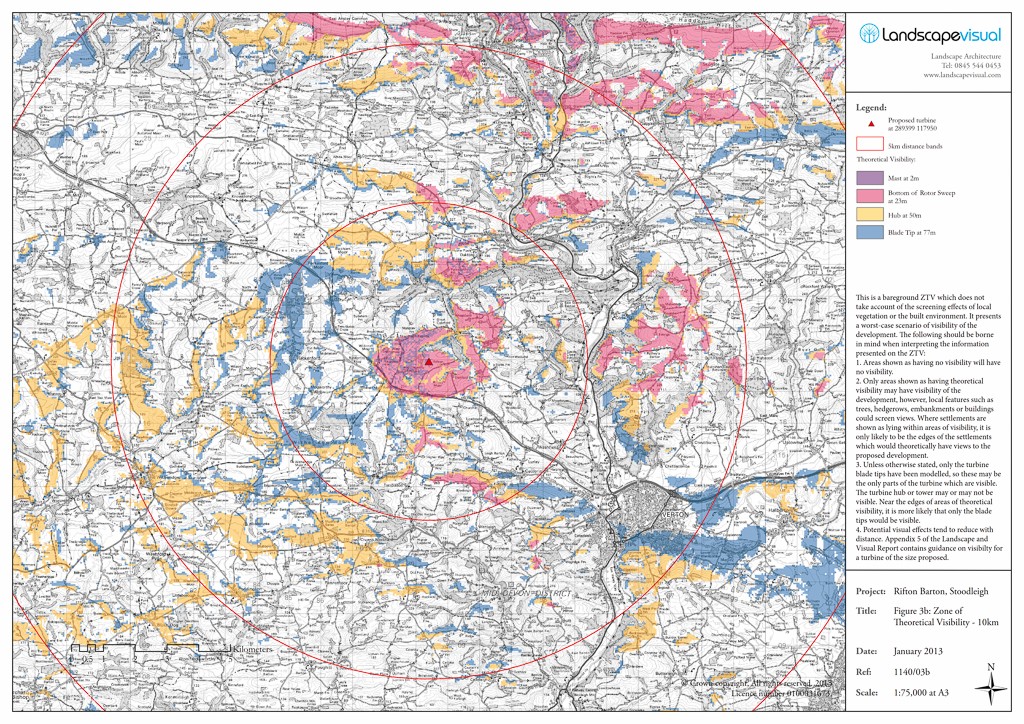 The image below shows a ZTV of a proposed tall building development. The ZTV is based on a digital surface model (DSM) comprised of Lidar survey data from the Environment Agency. The DSM shows 1m resolution data (an elevation reading for every 1m by 1m square) and includes buildings, vegetation and other surface features. In urban areas, this more detailed approach to ZTV modelling can be useful in identifying key view corridors along streets so helping to identify very specific potential views to a proposed development. In rural areas, the Lidar survey picks up hedgerows so ZTVs based on this data can give a more refined indication of theoretical visibility. Note that the ZTV output is theoretical and still requires interpretation. For example, theoretical visibility on the plan below is indicated from the roofs of buildings, which would not normally offer accessible public viewpoints. 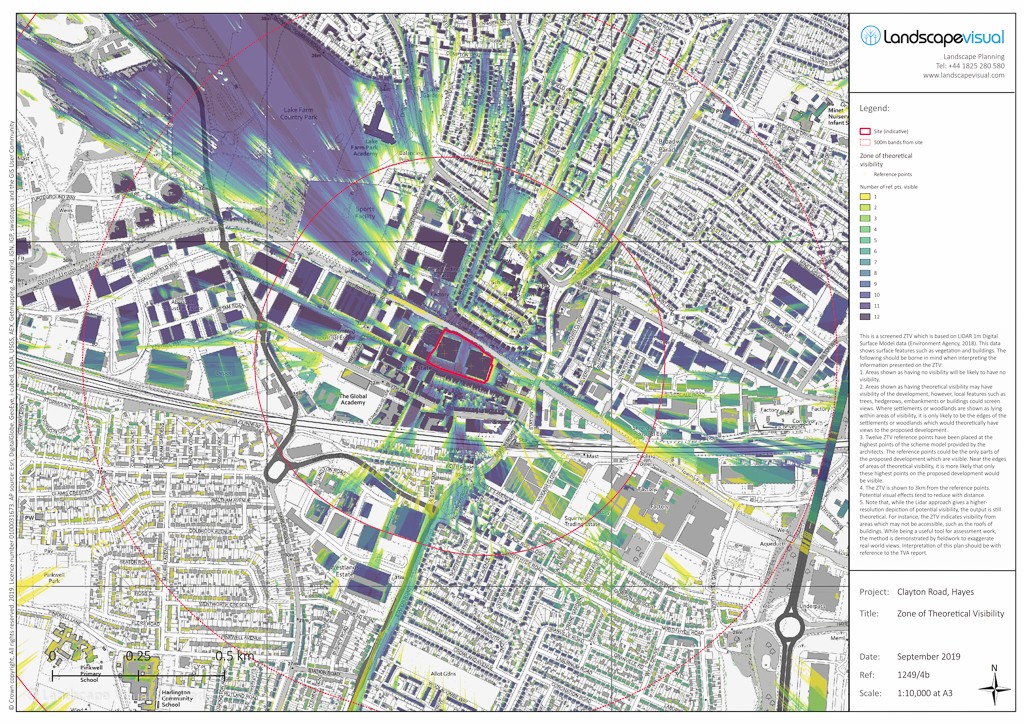 We can also use ZTV techniques to look at the relative visual exposure of a landscape. The visibility index (VI) is theoretical output which gives an estimate the size of the ZTV for each grid cell in a digital terrain model. This can be very useful where there is a large site, only part of which is required for the proposed development. The VI calculation can help identify areas of lower or higher sensitivity. An example VI map is provided below. The red areas are relatively more visible from other parts of the DTM than the blue areas. 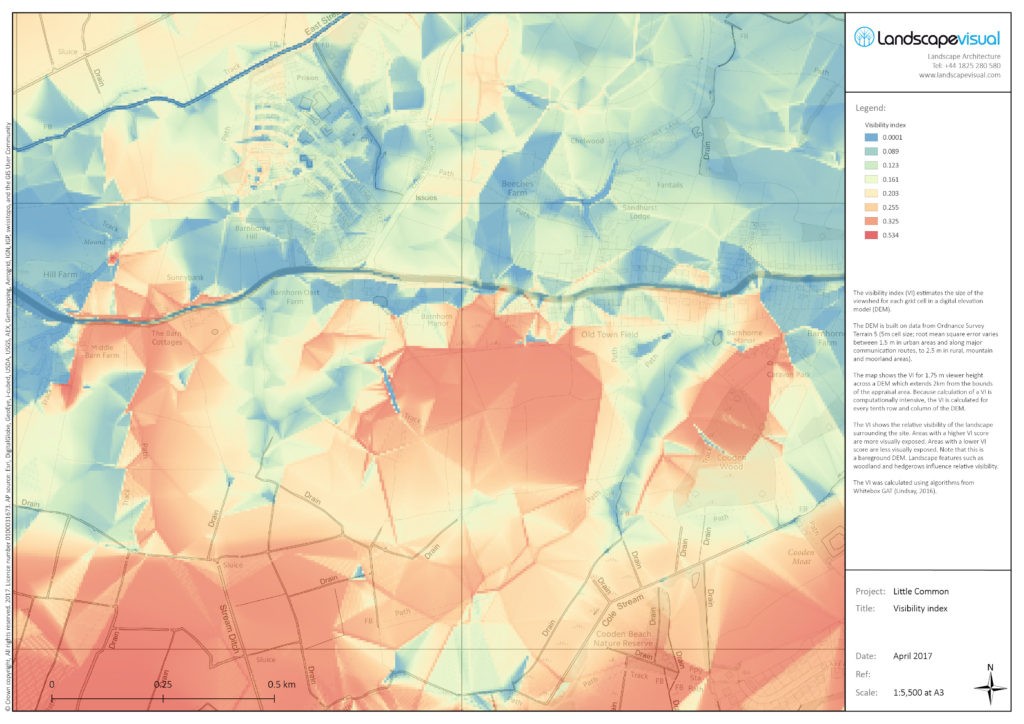 A ZTV shows the theoretical areas from where a development would be visible or not. The ZTV does not indicate the nature or significance of effects which would be likely to arise.

ZTVs can be very useful in early project stages to help identify the main areas of potential views. This can assist in locating assessment viewpoints and highlighting key receptors.

ZTV analysis can also be very useful in comparing development options, for example layouts which use different parts of a residential site, or different wind turbine heights.

It should be borne in mind that a ZTV will only be as accurate as the data on which it is based. It is normal for the landscape architect to verify the representativeness of the ZTV when doing LVIA site work.

ZTVs are potentially a powerful tool for landscape and townscape assessment work. There are various methods and data which can be used to produce ZTVs. Their application and interpretation needs careful consideration. In particular, it should be remembered that they only illustrate theoretical visibility.

Take a look at some of our projects, most of which will have involved some sort of ZTV modelling.